Where is all of the red mud?

The question “Where is red mud?” is basically equivalent to asking “Where are alumina refineries located?”. Obviously a refinery won’t dispose of their waste very far from where it is produced, unless it is disposed deep into the sea, as has been historically practiced by some refineries.  The other simple question I’m asking is how much red mud do these refineries produce? These questions haunted me already when I applied for the position in MSCA-ETN REDMUD and it took some while to get an idea of where the alumina refineries are located in Europe. There was a small map with red flags indicating refinery locations, but that wasn’t sufficient to understand the scale and geography of the production.  These questions weren’t too easy to answer by a simple web search either.

In this short blog article, I will only concentrate on alumina refineries and resulting bauxite residues in Western Europe. This is due to the difficulties of obtaining the proper information and also because our MSCA-ETN REDMUD project is mainly using red mud from European refineries for the experiments.

The first alumina refinery in Europe was Gardanne in France, which started operating in 1893 and is still producing specialty alumina today. Initially they used a 3 km pipeline to send the residues to the bottom of Mediterranean Sea. Now they have transferred their disposal technology to dry stacking on land [1]. Another refinery, Aluminium of Greece, had also used sea disposal for several decades but has now switched to dewatering the residues and dry stacking them on land [2]. Nowadays, sea discharge is simply not an option anywhere in the world [3]. Lagooning is a common method for disposing bauxite residue and it is presently practiced in Stade (Germany). While these slurry-like residues with low solid and high liquid proportion are known to cause caustic soda losses in the alumina production process, the refinery in Stade is known for having a good method for removing a significant amount of caustic liquor from the residues. The San Ciprian (Spain) and Aughinish (Ireland) refineries use dry stacking. The Eurallumina refinery used lagooning and planned to switch to dry stacking, but their production is now stopped[1].

The following table shows approximate estimations of bauxite residue quantities produced per year and bauxite residue disposal area (BRDA) size for Western European alumina refineries. These estimations are based on assumption that approximately 1.5 tonnes of residues are produced per one tonne of alumina[1]. It should be noted, however, that the ratio of bauxite residue per tonne of alumina can vary significantly. It can be as little as 0.3 t of residue per 1 t of alumina up to 2.5 t in case of low grade ores[4]. Western European refineries tend to use higher grade bauxites so the resulting residue quantity is relatively smaller[3].

*Calculated as 1.5 times of the production rate of alumina

On the map below you can view these quantities as proportional circles corresponding to the estimated bauxite residue production per year. By clicking on a circle you will see the name of the refinery and numeral quantity of residues produced. Again, the figures are approximate and give just a feeling of the magnitude. Placemarks show the locations of alumina refineries in Eastern Europe. By choosing satellite imagery and zooming in you can also find the red mud disposal sites.

From the map we can see that the majority of the refineries are concentrated in the southern part of Europe. This corresponds to the Mediterranean karst bauxite belt as the refineries are using primarily local raw material [5]. Refineries further north like Aughinish in Ireland rely on tropical bauxite imported from Western Africa. 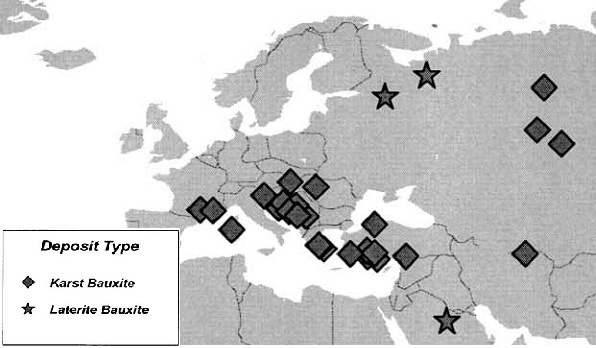 Figure 1. The distribution of bauxite deposits in European region (modified after [6])