The popularity of aluminium and its extensive use in materials within our everyday life started out a lot more extravagantly in the pages of history.

The method to extract aluminium began in 1808 based on the discovery of a theory of electrolytic-based aluminium production by Sir Humphry Davy. This theory was then confirmed by Hans Christian Oersted and Friedrich Wöhler. In the mid-19th century, the industrial manufacture of pure aluminium evolved from the efforts of Henri-Etienne Sainte-Claire Deville and his partners; The Tissiers, which built up from Wöhler process (1). The light and silver-like appearance of aluminium, and at an expensive cost had bequeathed this element into a status of luxury, where even Napoleon III, President of French Republic and born into the heir legacy of Napoleon I,  was purportedly known to serve his state dinners on aluminium plates, with gold and silverware used for the more commonplace guests (1,2). 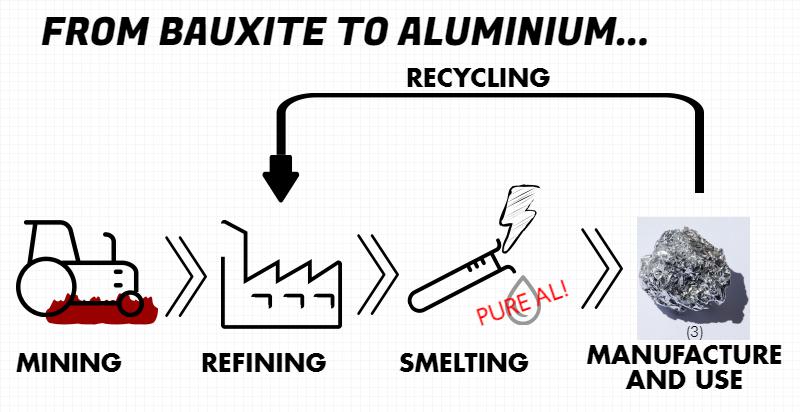 These days aluminium's cost per tonne has been the lowest base metal price in the market, surpassing copper, lead, nickel, tin and zinc altogether. The abundance of bauxite and aluminium-containing ores and increased popularity of aluminium as the lightweight metal of choice for vehicles and structural usage, as well as for the common everyday usage, requires a well-oiled process.

The recovery and efficiency of the aluminium can be said to have largely began from the discovery of the ores by geologist Pierre Berthier in 1821 in a place called 'Le Baux' (1). The ores contained a large portion of gibbsite (Al(OH)3), boehmite (γ-AlO(OH) and diaspore (α-AlO(OH), and was peppered with other iron, calcium and titanium-based mineral phases throughout the matrix (4). Refining bauxite ores have largely been developed through intertwining history of pyrometallurgical and hydrometallurgical routes. 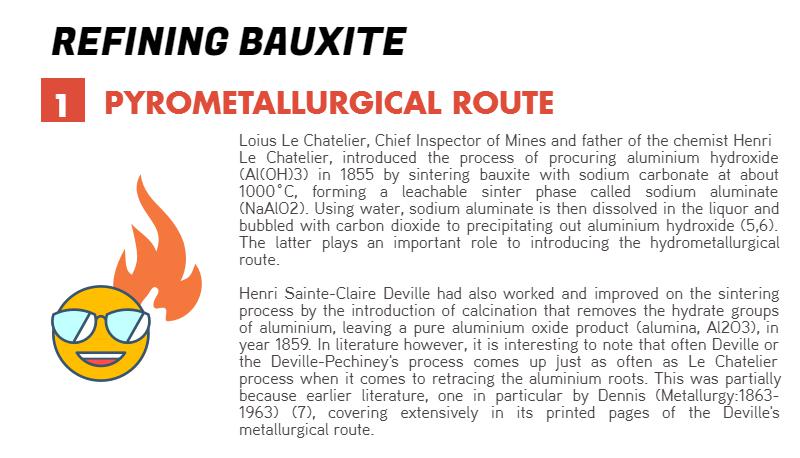 Loius Le Chatelier, Chief Inspector of Mines and father of the chemist Henri Le Chatelier, introduced the process of procuring aluminium hydroxide (Al(OH)3) in 1855 by sintering bauxite with sodium carbonate at about 1000˚C, forming a leachable sinter phase called sodium aluminate (NaAlO2). Using water, sodium aluminate is then dissolved in the liquor and bubbled with carbon dioxide to precipitating out aluminium hydroxide (5,6). The latter plays an important role to introducing the hydrometallurgical route.

Henri Sainte-Claire Deville had also worked and improved on the sintering process by the introduction of calcination that removes the hydrate groups of aluminium, leaving a pure aluminium oxide product (alumina, Al2O3), in year 1859. In literature however, it is interesting to note that often Deville or the Deville-Pechiney's process comes up just as often as Le Chatelier process when it comes to retracing the aluminium roots. This was partially because earlier literature, one in particular by Dennis (Metallurgy:1863-1963) (7), covering extensively in its printed pages of the Deville's metallurgical route.

The hydrometallurgical route stemmed from innovations towards the latter part of Le Chatelier's process. In searching for a better purity (and recovery) of aluminium hydroxide for mordants used to dye cottons and silks, Tentelev Chemical Plant recruited Austrian chemist Karl Bayer that then went on to discover that seeding with small amounts of aluminium hydroxide and together with vigorous agitation improved the precipitation of product (year 1888) and that leaching bauxite under pressure removes the dependency towards energy intensive pyrometallurgical methods (year 1892) (6). The discovery and patent of the Bayer process forever changed the approach to aluminium's recovery through the refining phase.

Where do we go now?

However, even though removing aluminium mineral phase from bauxite became more cost effective and energy efficient due the ascension of Bayer's hydrometallurgical process, there was still much work to do in recovering the shiny, silver and light metal that we know as aluminium today.

Hans Christian Oersted was the first to isolate aluminium in 1825 with impure nodules formed by reacting chlorine with alumina to produce aluminium chloride (AlCl3) which was then reacted with potassium amalgam. Friedrich Wöhler refined the process after Oersted and define its specific gravity in 1845 (5,6)

It took close to 30 years later before aluminium smelting ran on an industrial scale, with Deville again lending a hand to improve Oersted's original process. And with the aide of sodium, metallic aluminium with its new-borne term "silver of clay",  ceased to be associated with only jewellery and albatross luxuries.

Charlie Hall and Paul Héroult had independently performed work on the electrolysis of alumina and the discovery of the same process in an almost simultaneous fashion was a fortunate coincidence. The Hall-Heroult process, with the name paying respects to the two independent discoverers, involves the dissolution and electrolysis of alumina in molten cryolite (Na3AlF6) at temperatures around 900-950˚C, producing highly pure aluminium. The Hall-Heroult process had blown away most of the competing processing in the prevailing times because of the cost effective approach in reagents and less complicated manner of processing.

Recovering the aluminium that is lost from a stage of the process involves the consideration of not only the extensive use of time, resources and energy, but also the recoveries in the downstream stages of processing. Efficiency refers to the many aspects of a system where a balance is more necessary than a single solution. The development of the Bayer process and the Hall-Heroult combined had paved aluminium's way into a more commercialised future. 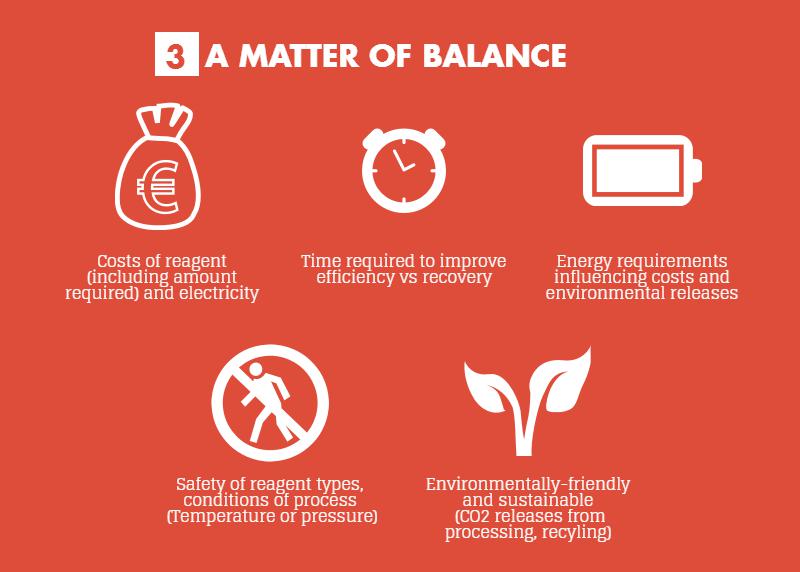 The industrial process of aluminium production has come a long way since the 18th century when aluminium was barely produced by the teaspoon. There is always still room for improvement, innovation and most importantly in this modern world, interaction. Our challenge for aluminium extraction in the present day context is to retrieve and remove the bulk aluminium and other major metals that are lost during the refining, and interacting with a more expansive field so that the residues after removing the major metals will be a lot more incorporated for the retrieval of rare earths and other trace elements.

Inspiration of all time – Marie Skłodowska-Curie