In the electromagnetic spectrum, microwave radiation is located between the infrared region and radio waves, with a frequency range of 0.3-300 GHz, corresponding to a free space wavelength between 1 m and 1 mm. This means that the electromagnetic signal oscillates from one billion to 300 billion times per second. [1]

When we talk about microwaves we tend to think of the type of oven that uses them to heat or cook food, which is very common in our homes. This use is certainly the most familiar one, but it's hardly the only one.

Microwaves have been used as detection systems since the World War II, in radar systems to determine the presence, position, shape, size and speed of aircraft and ships; today's systems are considerably more sophisticated and precise than those of sixty years ago.

They are, even, widely used in data transmission or in television broadcasts from point to point, between a mobile site and the main station. In these applications the lack of interaction between microwave and Earth's atmosphere and the ability to direct them to specific targets using collimated beams play key roles. Because of these characteristics you can use microwaves in the transmission of signals using a much lower power than other methods. Moreover, different methods of wireless data transmission between computers, like the standard Bluetooth, wi-fi and wi-max, use microwave frequencies between 2.4 and 5 GHz. [2][3]

Percy Spencer discovered the usefulness of microwaves in heating materials, during World War II. He worked at Raytheon, manufacturer of radar for the Ministry of Defence and he was in charge of the magnetron, the instrument invented in 1921 that generates the microwaves needed for radar signal. One day, fiddling before a powerful magnetron on, he noticed that the chocolate bar in his pocket had melted. He realized that microwaves could be used to cook food. The first food cooked by Spencer with microwaves generated by the prototype radar was popcorn. In 1947 the first microwave was born, it was almost 2 m high, had a mass of 350 kg and produced 3 kW of power. The modern microwave ovens are smaller and produce from 600 W to 1000 W of power. 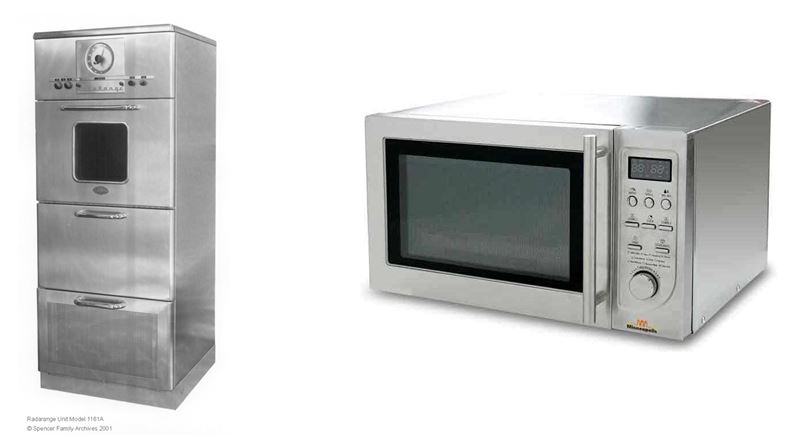 The radiation is generated within the oven (from the magnetron) and, due to the metal structure of the oven (Faraday cage) they continuously bounce off the walls and cannot get out [2][3].

Now the question we can ask is how does the microwave heat materials?

We know that microwaves are a form of electromagnetic radiation, which are associated with both an electrical field and a magnetic field.

Molecules that have a permanent dipole (we can imagine these molecules as tiny sticks with a positive electrical charge at one end and a negative one to the other), in the presence of an electric field, tend to align with the field. If the electric field oscillates, the orientations of the dipoles will vary in response to each oscillation.

The result of these continuous realignments within the oscillating electric field, is the production of internal heat, with an increase in temperature of around of 10 °C per second.

Water molecules especially, but also fat and sugar, are capable of absorbing energy from microwaves. When they are immersed in an environment saturated with microwaves, the molecules begin to oscillate continuously to align with the electromagnetic fields that pass through them. Since the frequency of these fields is very high, they are constantly changing orientation and molecules remain in continuous vibration. The water molecules oscillate continuously and in this way cause an increase in temperature, for example, of the piece of meat in which they are contained. On the contrary, the plate on which is placed the meat is not heated by the microwaves, but it warms only by contact with the meat [2].

Depending on the interaction of a material with microwaves, it can be classified into three groups:

Figure  4. Interaction of materials with microwaves [4]

From Kitchen To Lab

In the recent decades, researchers have focused their attention on the use of microwave radiation as a heat source. Lab microwave heating systems are similar to “home microwave ovens”; the material is placed in a metal applicator (i.e. oven) for heating and removed when heating is complete. The microwave power is supplied from a self-contained microwave power supply unit which contains a magnetron tube. The microwave energy is directed towards the applicator by a waveguide [5].

Microwave energy is extremely efficient in the selective heating of materials as no energy is wasted in ‘bulk heating’ the sample. In general, therefore, it can be said that the technology based on microwaves has many advantages from an environmental point of view: it can generate heat instantaneously inside moderately adsorptive materials instead of heat from outside surface and it is believed to be clean (it applies well to environmentally friendly solvents, such as water or ionic liquids), practical and achievable heating source [5]. For all these reasons, microwave heating processes are currently undergoing investigation for application in a number of fields where the advantages of microwave energy may lead to significant savings in energy consumption, process time and environmental remediation [4].