Do you know that ion exchange materials are essential for our everyday life? They are part of water purification systems, lithium batteries, pharmaceuticals, to name just a few. However, do you really understand what ion exchange is?

Ion exchange describes a series of chemical reactions in which one kind of ion is translocated from an aqueous phase into a solid phase and simultaneously another kind of ion is emitted from the solid to liquid phase. For example, water softening is a typical ion exchange application (Figure 1), in which calcium or magnesium ions are exchanged with sodium ions. Ion exchangers are classified as cation exchanger and anion exchangers depending on which type of charged ion they favor. Generally speaking, ion exchange is a reversible process.

In the Old Testament of the Holy Bible, Moses utilized a tree as ion exchanger to remove the bitter-tasting minerals of sodium, calcium, and magnesium from sea water. Aristotle’s Problematica indicates that sand filters were used for the purification of sea and impure drinking waters. Later in the 19th to 20th centuries, soil chemists began to realize that certain types of soil could be used to treat seawater or wastewater. The obtained water is odorless and has no taste of salt.

To the Manhattan Project…

The Manhattan Project (Figure 2), led by United States, United Kingdom, and Canada, was a research and development project that produced the first nuclear weapons during World War II. At that time, scientists were trying to find some analytical procedure to identify the products of uranium fission. Ion exchange column chromatography was developed during that period and, due to the confidentiality nature of the project, tons of data were only available to the academia after the war period. At that time, some specific ion exchange selectivity is already reported.

Figure 2. Logo of the Manhattan Project. [3]

The most common application of ion exchange is water treatment. You might wonder what kinds of materials are embedded into household water filters (Figure 3). Sometimes you can actually taste the difference between tap water before and after treatment. Basically they are adsorption and ion exchange materials inside the water filter. The problems with tap water nowadays are mainly associated with piping, materials from the pipes could be dissolved into the tap water, such as metal ions and small organics. There are also some calcium or magnesium present as the total dissolved solids. By using the ion exchange and adsorption process, the tap water is again freshly purified. 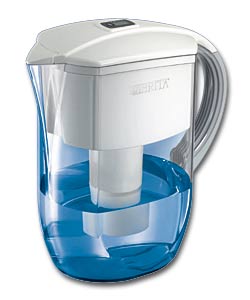 Bauxite residue or redmud, contains important concentrations of rare earth elements. In order to separate the rare earths, we need to first dissolve the residue in acids. The leachate contains very high amount of iron and aluminum while only small but economically viable amount of rare earths are present. Targeted ion exchange materials are now being developed under this project to efficiently separate rare earth elements from the leaching solution with a simple ion exchange column step.