The humble toaster is one of modern life’s most commonly used conveniences. But these unassuming little boxes are surprisingly complicated machines, each with a complex and interesting life story. Exploring and understanding this life story can offer us surprising insights into how each of us can contribute to building a sustainable future.

Toast is one of the most important foundations of the modern European economy. Bear with me here. Think of the countless millions of people who leave the house in the morning nourished and ready for the day on the back of a slice of buttered toast. The innumerable hours of productivity that would have been lost were it not for the complex carbohydrates locked up in that warm, tasty, portable morning lifeline. It’s very difficult to eat a bowl of cereal on the go, and there’s something about a buttered piece of ‘raw’ bread that doesn’t quite cut it. And making toast couldn’t be simpler. A couple of slices of bread go in, the lever goes down, and before you know it, toast.

The toaster is one of those modern conveniences we take for granted, but even a toaster has an interesting and extensive life story, a story none of us ever really think about. One person who did end up thinking about the life story of a toaster was British artist Thomas Thwaites. One day, he decided to try and make a toaster from scratch. And he meant from scratch, all the way back to the ‘rocks and sludge’ from which all of our stuff is eventually made.

He started with the idea that the cheapest toaster would be the easiest to reverse engineer, but when he opened up his £3.94 (~€5) toaster he discovered 400 different parts made of over 100 different materials! Naturally he decided to focus on the most important parts, and so will we. Four of the most important materials in your household toaster are the steel in the frame, the screws and the lever mechanism, the copper and nickel in the wires and the heating element, and the plastic in the casing. But tracking the life history of just these four parts of a toaster can take you to some strange and interesting places that you’re unlikely to think about when you’re having your breakfast. It’s in these places that we can discover some of the hidden impacts that our toaster might have on the environment, and how we might be able to avoid them. 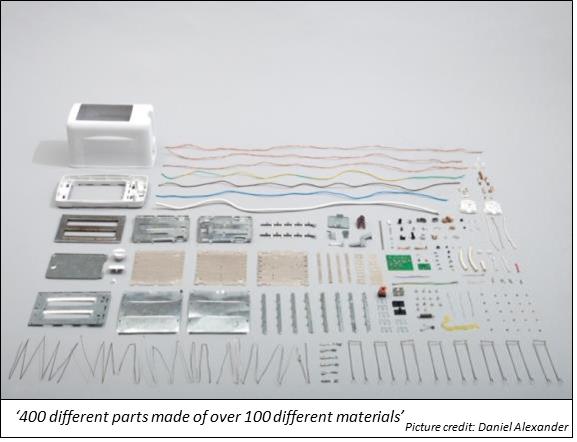 How do you make a toaster?

The life story of a toaster doesn’t begin at the local electronics shop, but in an iron ore mine in China, a copper mine in Chile, a nickel mine in Russia and an oil field in Saudi Arabia. And the materials you find there are not particularly amenable for use in toaster production, yet. Clearly a lot more goes into making the materials required for our toaster than just ores and oil.

The ores need to be blasted from the rock face of the mine, which requires explosives. The pieces of rock which are obtained need to be ground to a manageable size, which requires grinding machines, and electricity to run them. The iron ore needs to be mixed with coke and limestone and heated in blast furnace to extract the iron. The copper and nickel ores (which only contain 1 or 2% copper or nickel) need to go through a wide variety of processes, and then be smelted and purified to extract the metals. This requires a wide variety of solvents, gases and fuels as well as electricity.

The oil needs to be refined, cracked, purified and polymerised to make the plastic components, again requiring materials and energy. And where do these materials and this energy come from? They aren’t found in nature either. They need to be made too. The electricity might come from the combustion of coal or gas, but the coal needs to be mined, or the gas extracted and refined. And the power station and distribution system need to be built, meaning more steel, more copper, and a whole host of other materials are required.

The production of something as seemingly simple as a toaster is in fact reliant on the entirety of the complex sociotechnical system that humans have developed since the industrial revolution; a globally connected web of inputs and outputs, products and processes. And each part of this web is inextricably linked to the environment, through the wastes, emissions and pollutants that are produced alongside these products.

The environmental impact of a toaster

Among the most common images of environmental pollution seen in the media are power stations, factories and mine outflows. Looking at these images, you can imagine the pollution rising into our air or flowing into our rivers. And so, unsurprisingly, most legislation and effort aimed at reducing pollution is aimed at these big infrastructural targets.

But let’s ask ourselves, why are these mines, factories and power plants there in the first place? They’re there to produce the ores and the materials and the energy which are needed to make the toasters and the TVs and the telephones that surround us every day.

It is possible to understand the impact we have on the environment from the point of view of the products and technologies we use. By taking a ‘cradle to grave’ approach, using a technique called Life Cycle Assessment (LCA), we can build an understanding of the contribution our product makes throughout its life to the need for energy and materials which is driving the pollution in our pictures.

Even starting with relatively basic information about a product – what it’s made of, where it’s made, how it’s used – you can begin to build a computer model of its life cycle. Within this model, you can identify the areas of the life cycle of a product that contribute the most to its total environmental impact. Armed with this information, you can then begin to optimise the life cycle to reduce the impact that that product causes.

In the case of the toaster, it’s likely that a lot of the environmental impact results from the electricity it uses while it’s toasting. Adding some extra insulation to the casing, so that it toasts more efficiently, might help reduce the amount of electricity it uses over its lifetime. Using the life cycle model, we can calculate both the additional impact caused by using this extra material, and the avoided impact resulting from using less electricity and find the point at which the overall impact of the toaster is the lowest. Multiply this saving by the millions of toasters purchased around the world every year, and the environmental savings start to add up.

Similarly, every time we throw away an old broken toaster and buy a new one, not only does our old toaster need to be dealt with (ideally recycled, but more likely incinerated or landfilled), but a new toaster has to be made, with all of the impacts that entails. If we can design a toaster to last twice as long, we might add a bit of material to that toaster, but in the grand scheme of things we’re saving all of the materials that would have gone into the second toaster.

So what can we do?

The industrial revolution may have precipitated the unprecedented impact we humans are having on our environment, but it also paved the way for previously unthinkable advances in human health, wellbeing and quality of life. The way to reduce our impact on the environment, while maintaining our standard of living is not to turn away from the modern world.

Forgoing the sociotechnical system we live in, is unlikely to have very successful results, as you can see from the picture of our intrepid toaster-maker’s finished product (produced at a total cost of £1187.54). The further tragedy is that, partly due to the lack of insulation on the wires – apparently Kew gardens weren’t keen on him tapping their rubber trees – the element melted shortly after it was turned on for the first time…

The opportunities out there for environmental impact reduction lie in making this sociotechnical system use our planet’s resources more efficiently as it produces the things we need to survive in the modern world.

The moral of Thomas Thwaites’ story is not just that it’s hard to make a toaster. What it highlights is how little we tend to think about what really goes into making all of the stuff that surrounds us.

So next time you make a slice of toast in the morning, take a moment to think about the explosive start to your toaster’s life cycle in the mines of China and Chile. The coal and the gas (and the wind turbines) that are being used to make the element glow. Maybe even think about the factories that produced the fertilisers to grow the wheat that went into the bread.

And, just for us, the next time you next reach for a can of beer after a tough, toast fuelled day at work, try and picture a handful of red mud in your other hand[1]. Perhaps think about the long list of useful resources in that little bit of mud, and the tragedy that in reality the mud produced to make your can is most likely in a storage area rather than being used to make new materials and products. Then take heart that the ETN-REDMUD researchers are working hard to find sustainable, economically viable ways to do just that.

Then make sure you put the can in the recycling!

[1] An aluminium can weighs about 15 g, and producing 15 g of primary aluminium leads to the production of roughly 45g of bauxite residue – about a small handful.