Rare Earth Elements: perhaps not everyone knows that … 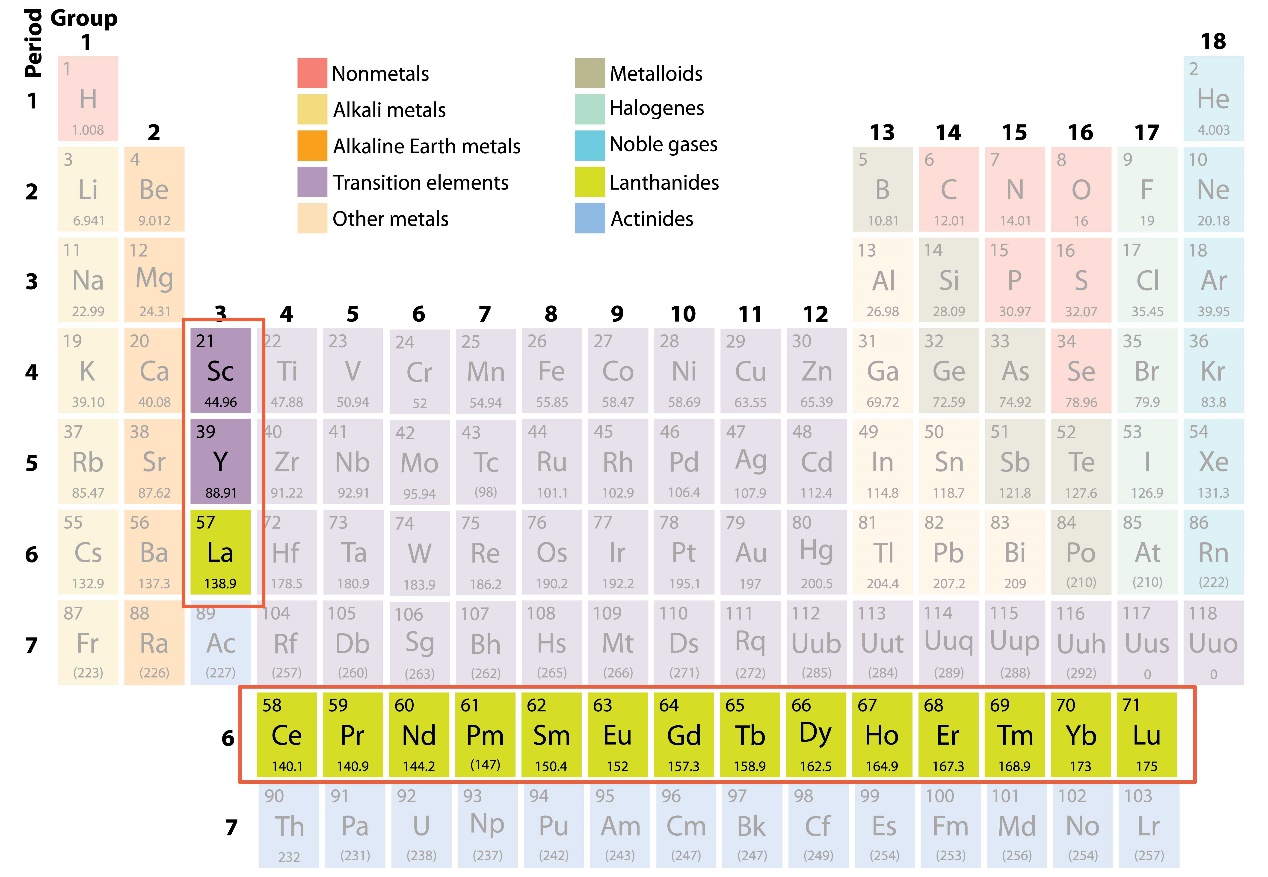 Rare earths are a group of seventeen elements of the periodic table (figure 1). Fifteen of these elements belong to the group of lanthanides (lanthanum, cerium, praseodymium, neodymium, promethium, samarium, europium, gadolinium, terbium, dysprosium, holmium, erbium, thulium, ytterbium, and lutetium), whereas the other two are yttrium and scandium, which have similar chemical and physical properties to lanthanides and they tend to exist in the same ore deposits as the lanthanides.

Why are REEs important?

Perhaps not everyone knows that rare earths are nearly everywhere in our daily life (figure 2). When we go for a walk during night in our cities, make a call with our smartphone or relax in front of the television, even when we watch a football match at the stadium, unknowingly we are handling a large amount of rare earths.

The list of things that contain Rare Earth Elements (REEs) is almost endless. In fact, because of their exceptional magnetic, luminescent, electrochemical and catalytic properties, these elements are essential to modern technologies.

Magnets made with REEs are much more powerful than conventional magnets and weigh less; that's one reason so many electronic devices have gotten so small. The red colour in our LCD TVs comes from europium [1]. Our smartphones contain rare earths (e.g. an iPhone contains eight rare earths). Although the amount of rare earths in each phone is very small, the quantity of phones sold each year is impressive. According to Apple, in 2012 over 125 million iPhones were sold worldwide, up from 72 million in 2011 [2]. Also digital cameras contain REEs: the electronic circuit board has magnets in it that include neodymium, samarium and many other rare earths; lenses are made from a special glass that has lanthanum or lutetium in it, so that the images have no distortion; europium and terbium make the display look colourful [3]. 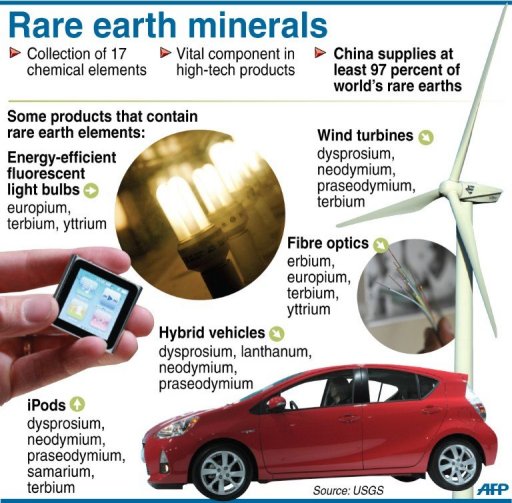 Can we talk about “RARE” metals?

Karl Axel Arrhenius discovered REEs in 1787 in a quarry near Ytterby (Sweden). Johann Gadolin misleadingly suggested the term “rare earths” in 1794: “rare” because, when the first REEs were discovered, he thought that they were present only in small amounts in the Earth’s crust, and “earths” because, as oxides, REEs have an earthy appearance [4].

Despite on their name, REEs are not rare. In fact the more abundant REEs are each similar in Earth’s crust concentration to other metals such as chromium, nickel, copper, zinc, molybdenum, tin, tungsten, or lead. Even the two least abundant REEs (Tm, Lu) are nearly 200 times more common than gold [5] (figure 3). 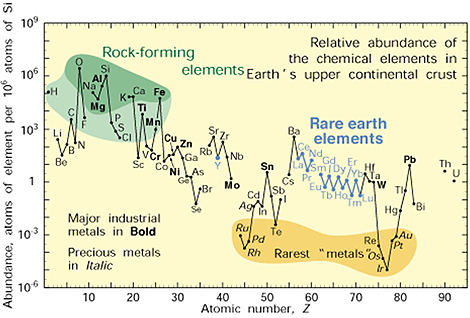 However, REEs are difficult to mine because they occur together with other mineral ores (the most feasible ores for REEs extraction are bastnasite, xenotime, and monazite) [6].

With the increasing on demand and prices and with Europe depending entirely on imports (China has been producing approximately 85% of the world's supply), REEs provision has become more difficult.

For these reasons, in 2010 the European Commission, taking into account both their economic importance and the supply risk, published a list of 14 materials defined “critical”. 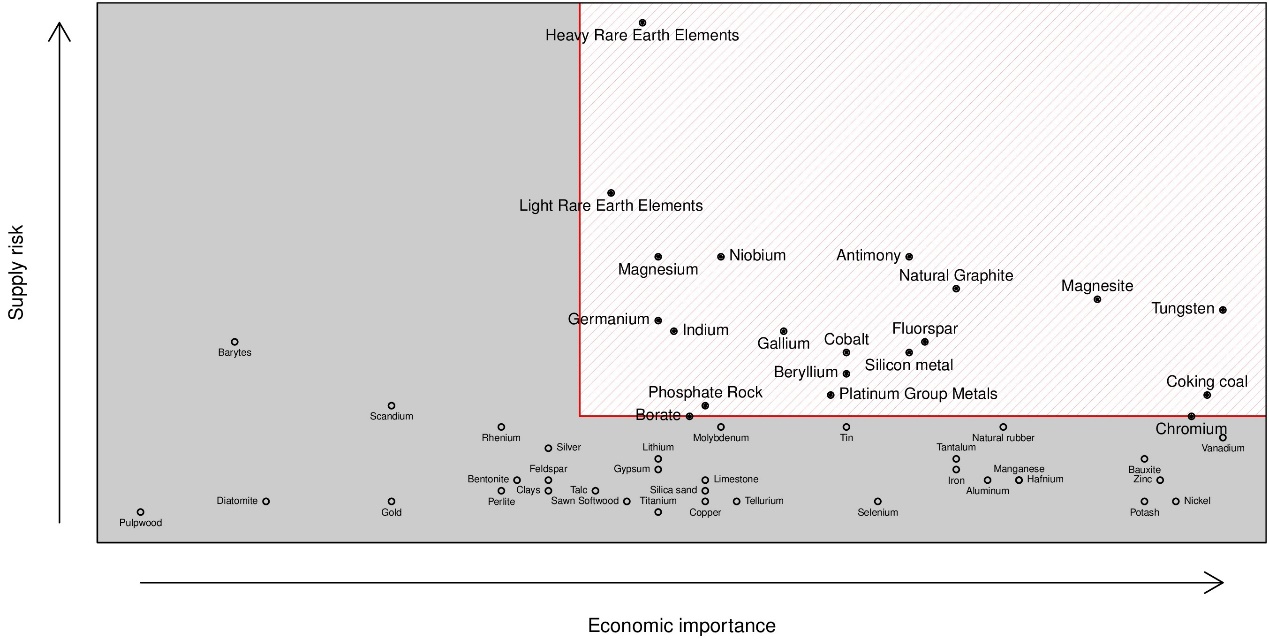 The list was revised and extended in 2013, where twenty Critical Raw Materials (CRM) were determined. As we can observe from figure 4, REEs are the most CRM.

This analysis is within the EU Raw Materials Initiative (RMI), promoted in 2008 to contrast the monopoly of some countries on strategic raw materials and based on three pillars:

Ensuring sustainable access to these raw materials is crucial to the competitiveness and growth of the EU economy and to the objectives of the Europe 2020 strategy [8].